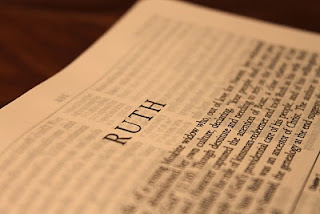 Tonight we looked at one of my favorite people in the Bible- Ruth. There are so many things to love about her- her devotion to God and her family, her work ethic, her faithfulness, the way she symbolizes us and Boaz symbolizes Christ, the fact that she is another one of the five women named in the genealogy of Christ in Matthew 1. Ruth is not a Jew, but a woman from Moab. When Naomi and her family leave Bethlehem to go to Moab in search of food during a famine, Ruth marries one of Naomi's sons. Then Naomi's husband dies and then Ruth's husband, Naomi's son, also dies as does her other son. Naomi, now a bitter and angry woman, leaves Moab to return to her family in Bethlehem and her two daughters-in-law travel with her. Naomi though has compassion on these woman and gives them permission to return to their families in Moab. Orpah does just this. But Ruth remains with Naomi. Ruth tells Naomi that she is her family now- that her people (the Jews) are now Ruth's people and that her God is also Ruth's God. And so Ruth travels back to Bethlehem- to a foreign town, a foreign people and with an angry and bitter woman. When they arrive in Bethlehem, they need food and so Ruth goes everyday to the fields of a man named Boaz and collects the wheat that is left on the ground after the workers finish in the field. She works all day gathering grain and then goes home to take care of Naomi. Eventually, Boaz hears about Ruth and Naomi, particularly about Ruth's faithfulness and kindness to Naomi. Long story short, Boaz is a relative of Ruth's husband and so has the responsibilty and the right to marry Ruth and take care of her- called her Kinsman Redeemer. There is another relative more closely related, and although Boaz wants to marry Ruth, he offers the opportunity to this man, who turns it down. Boaz redeems Ruth- he marries her, loves her and takes care of her. And they have a son named Obed, who has a son named Jesse (who our tree is named after) who has a son named David. And eventually, a son named Jesus.

Ruth was faithful- even when it was hard- hard to love Naomi, hard to leave her family, hard to work in the fields- but still she was faithful. And God was not absent or unaware. He provided a wonderful man named Boaz to redeem her from the life she was condemned to as a widow and as a foreigner. And He allowed her to be in the line of David and thus in the line of the Messiah. In the same way, God calls us to be faithful- even when its hard- hard to love the unlovable, hard to work as He has called us to. But He has not left us alone. He has provided a redeemer in Jesus Christ to love us and redeem us from the life was are condemed to by our sin. And we are His bride and so He loves us and provides for us and calls us His own. 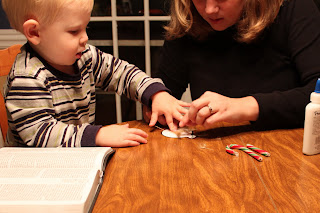 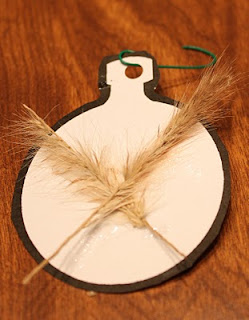 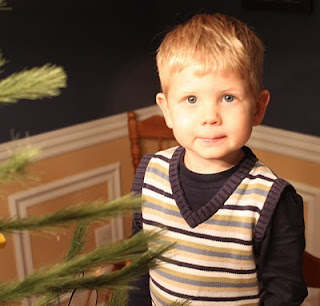 Caleb hangs it on the tree