Over Fall Break we decided to take a trip down to Florida to see some friends from Seminary who we haven't seen in years. Our first stop was with our very best friends from seminary, Jason and Karen Wilson. We actually met Jason and Karen in July 2001, before we were married, as we moved our stuff into our apartment. We moved our stuff into our apartment in Wake Forest about two weeks before we were married. I'll always remember how bummed Jason was that we weren't moving in yet! I think they were so ready for people to be there. Jason and Karen's front door was about 4 feet from ours. For three and half years, they were our best friends. We had a weekly date on Thursday nights. Jack and I went over to Jason and Karen's every Thursday to watch Survivor. It became such a wonderful weekly date that we still got together every Thursday even in between seasons of Survivor. In fact, our church small group once tried to switch nights to Thursday and Jack and I had to say that if we switched to Thursdays we wouldn't be able to come. Thursday nights belonged to the Wilsons. We went on three vacations together- Florida, Washington, D.C. and a Caribbean Cruise.

In October 2003, Jason and Karen had their daughter, Allie. Jack and I loved her like she was our own. We were lovingly named Uncle Jack and Aunt Carrie. And in December 2004, Jack and Jason graduated from Southeastern. For a bit we thought that God might actually be calling Jack and Jason to the same church in Florida- FBC Orange City. While we were in seminary, Jack and I were members of Faith Baptist Church where Jack taught a young married Sunday school class. James and Shana Hilton were members of this class and our good friends. James finished his PHD at Southeastern and went to pastor FBC Orange City in 2003. When Jack and Jason graduated we thought we might all end up at FBC, but God had other plans and Jack and I went to Georgia.

In the 8 years since then, we've seen the Wilsons a handful of times- once we visited them in Florida (2005) when I was pregnant with Caleb and their twins, Anna and Ethan, had just been born, then once when they were in South Carolina visiting Karen's family- July 2006 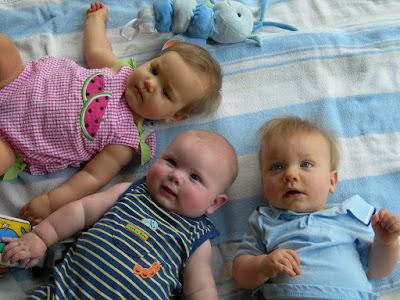 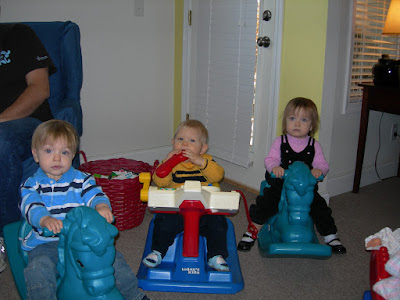 And then in January 2010 when they were in town again for Passion. This time they just had their youngest, Abby, with them, who was born one day before Josiah- August 26, 2009. 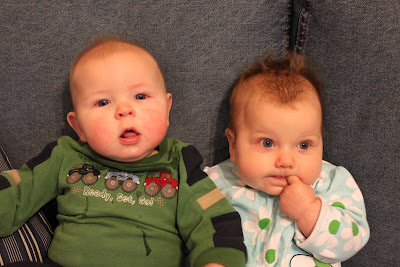 Those were really quick visits, and we were so looking forward to seeing them for an extended time in Florida. In the 8 years since Seminary, Allie has been joined by a combined 8 children- Anna and Ethan in 2005, Caleb in 2006, Noah and Eli in 2008, Abby and Josiah in 2009 and Eden in 2011. That's right- together we have 9 children between us. We were so excited to get them together.

Friday night we spent the night at the Wilsons. The kids hit it off and had a great time playing together. We enjoyed a night of worship at their church and then after the kids went to bed, the four of us enjoyed a steak dinner and stayed up until 1:00 am talking. It was so great the ease with which we talked, even after all these years. It really felt like nothing has changed and we still live next door. I was overwhelmed during the church service by the goodness and grace of God to have blessed us with such friends and allowed us to be together again. 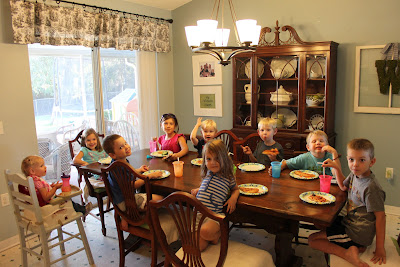 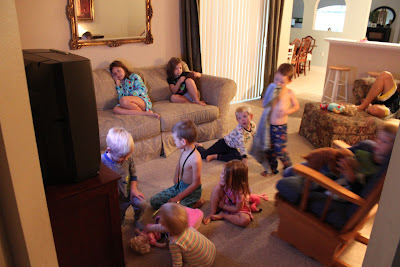 All the kids in their pj's on Saturday morning

We visited other friends on Saturday (another post on that later) and then Sunday went back to FBC Orange City for church. We got to be led in worship by Jason and sit under our friend James' preaching. It was seriously awesome. We tried to get a group picture after church- ever tried to get a picture with 9 kids?!? Nearly impossible. 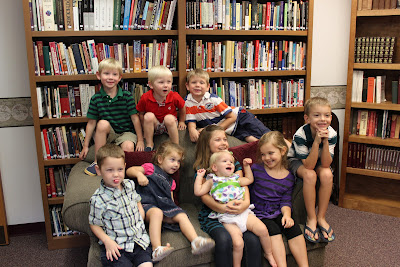 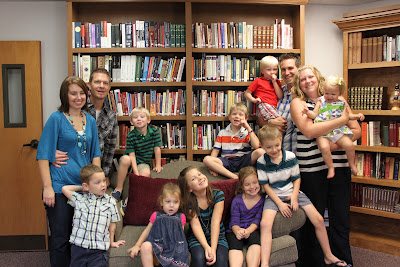 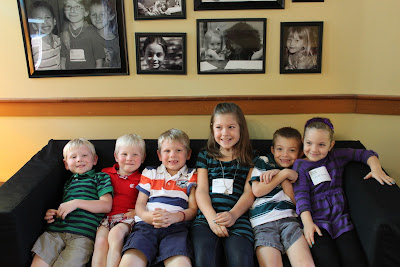 Noah, Josiah, Caleb, Allie, Ethan, Anna (missing Eli and Abby who were in Sunday School and Eden who did not want to cooperate!)

And then after church we all went back to the Hilton's house for lunch- a smoked pork boston butt, so delicious. In the 9 years since they left Southeastern, James and Shana have had 4 children- Josiah in 2004, twins Gracelyn and Hailyn in 2006, and Ansley in 2009. Yes, if you are keeping count, on Sunday there were 13 children between the three families. The kids had so much fun playing and we loved, loved, loved visiting all afternoon with such sweet friends. 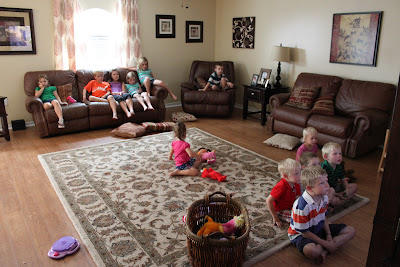 All the kids, except Eden, watching a movie 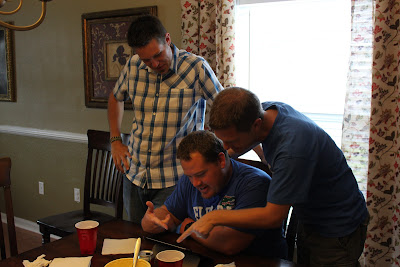 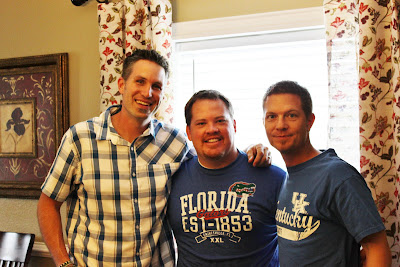 It was such a wonderful refreshing time. I don't know when we'll do it again- maybe every Fall Break?!?!- but I do know we are not going to let it be so long again.