So, this week is Vacation Bible School at our church. And since our children's director has moved to Texas to attend Seminary, the role of VBS Director fell to me. But I was ok with that. Wanna know why? Because I love VBS! I really do. Well, let me be honest, I love VBS 51 weeks out of the year. That week right before VBS.... well don't ask me then how I feel about it! Because that last week is exhausting! Especially this year when I am 6 months pregnant with a 1 year old and 3 year old to chase around while trying to get everything ready for VBS! Last week was rough, to say the least. I wouldn't have survived without some great help from friends but especially my amazing husband! But now that last week is over and we have started our VBS, I love VBS again!

There are lots of reasons that I love VBS:

1. It was at VBS when I was 10 years old that I realized my need for a Savior and came into a relationship with the love of my life, Jesus!

2. During VBS I get to act like a crazy kid and it is totally ok! I had a blast last night leading the songs and dancing all over (and don't worry, I think Josiah liked it too!)

3. Our church does VBS like no other I have ever seen. We may not be a large church, but we do it to the hilt! The entire church looks like a swamp this year for Crocodile Dock VBS and it is very cool!

4. Our church has been going through a transistion in the past 6 months as we have been without a lead pastor. And so, we have lost some integral members. But God just used that to show His Glory, His Sovereignty! Would you know we have plenty of adult workers? And several workers are helping this year who may not have in the past as we would have just filled their spots with the "usuals." I think it is so amazing when God does what it seems like can't be done!

5. This year is really special for me as my baby is now old enough to attend his first VBS. It's hard to believe Caleb is already going to VBS, but he is! And last night he had a great time. He told me his favorite part was the music and the clapping! 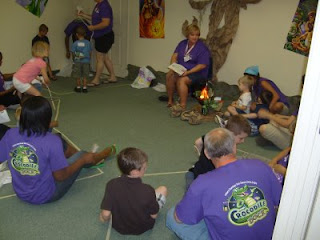 Caleb is in the white shirt, checkin out the Burning Bush! 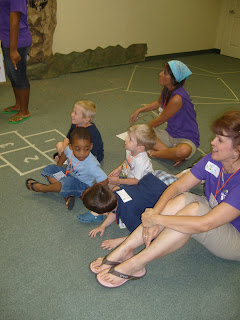 Here he is with his crew and crew leaders watching Chadder the Chipmunk!

There will be more pictures coming, I promise!

6. Kids hear the gospel in a fun and real way. They see the gospel in the way adults encourage and love them and they hear the gospel in the Bible stories. The majority of our kids do not attend our church, which I find really cool. Last night we had 56 at our VBS, and we'll probably have more each night this week. And the vast majority of those 56 don't go to our church. I love that they love VBS! I love that they are a captive audience for the Gospel! I love that I have the privelege of sharing God's amazing love story with them! Pray for Thursday night which is when we clearly communicate God's plan in Christ to them. Pray for me, that I will communicate it clearly in the closing celebration. And pray for the hearts of these precious kids to be drawn to the Savior!

I love VBS!! But next week, I am also going to love going to my Mama's while Jack is at World Changers, and doing a whole lot of nothing!! I am going to need it after this week!!