Caleb had his Fall Program yesterday at school. They had an Indian Village where the children walk around the gym doing different crafts and activities related to the Indians. What we didn't realize until we got there was that the children were also performing (the 2 year olds don't perform since they are so young so last year we just did the Indian Village and were unaware there was a program). As soon as I dropped him at his room and realized they were getting dressed up to perform, I called Jack to tell him. A big Thank you to Pastor Michael who told Jack absolutely he could come see Caleb perform. When Caleb's class got onto the stage and Caleb looked out and saw Jack there, his precious face lit up and he yelled "DADDY!!" I am soooooo glad Jack was there.

They sang two songs and then the whole school sang a song together. As you will see, Caleb did not sing a word! What a crazy kid! He just doesn't sing in public. He loves music and when he thinks no one is listening or when he's not thinking about it, he sings! Jack and I love to hear him sing in the car. But at VBS- no singing, no dancing for Caleb. On Wednesday nights at church his teachers tell me- no singing, no dancing for Caleb. And yesterday during the program- no singing. He just stood there looking adorable. So be prepared for a 2 minute video of Caleb just standing there! 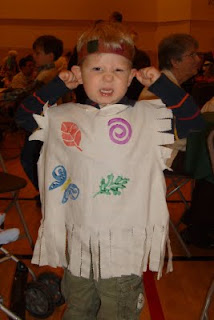 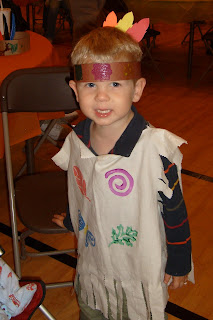 He may not sing, but he sure is cute!