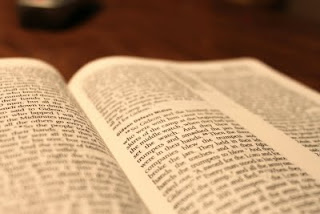 Tonight we learned the story of Gideon and his small army in Judges 7. The Midianite and Amakelite armies had been oppressing Israel for seven years which God had allowed to happen in judgement of Israel's idolatry. God spoke to Gideon who destroyed the altars to Baal and assembled an army to drive the Midianites and Amakelites out. The Israelite army numbered 32,000 and God told Gideon to reduce the size of the army, for if they defeated the Midianites and Amakelites with such a large number they would only boast in themselves. So Gideon told those who were afraid to go home- 22,000 did. Now their army numbered only 10,000 but still God knew they would only boast in themselves. By the time God was finished, Gideon's army numbered only 300. In a dream, God told Gideon the battle plan. The army divided into 3 groups and each man had a jar, a torch and a trumpet. On Gideon's signal they all broke their jars, blew their trumpets, raised their torches and shouted. The Midianite and Amekelite armies fled in fear.

Tonight's big lesson- God uses us when we are most weak to display His power and strength. He used only 300 men to defeat two armies. And had He used a strong Israelite army, they would have received the glory. But because their victory was so unexpected that only God could have done it, He got the glory. And that is still how He works in our lives today. Just like He took a simple teenage girl to bear His son, a simple carpenter to be His earthly father, simply shepherds to announce the arrival of the Messiah, simple fishermen to spread the Gospel and start the church. He uses us in ways that we don't expect and cannot predict so that it is He who receives the glory for the great things He has done! 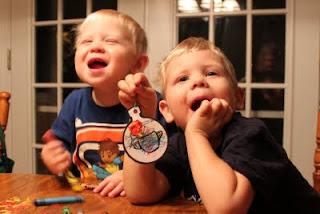 The boys with the torch and jar ornament- acting like their crazy selves!