Five years ago, God brought us to Ewing Road Baptist Church. Shortly thereafter plans were made to build a student space. At the time, the student ministry met in a small room off of the fellowship hall which we outgrew quickly. We moved out of the room into the fellowship hall, but there was one problem- the fellowship hall was used for Wednesday night dinners which lasted right up until our Wednesday night worship began. We spent a year frantically clearing away tables and setting up chairs every Wednesday nights. Meanwhile, the building team drew up plans for a building. The church voted and approved the plans. A building campaign took place and $89,000 was raised in 8 weeks. Everyone was pumped, especially the students. But no one was ready for Cobb County. Unfortunately we were unaware the Cobb County Georgia is one of the hardest places for a church to build or expand. The county would not approve our plans until we did $1 million in site work including planting trees, building a parking lot and a sidewalk down the entire length of our church property. This cost more than the building would! Needless to say, we moved onto Plan B- an addition onto our current church building. Additions don't need site plans. But more and more road blocks, the dissolution of one building team, the creation of a new one, different opinions about what should be in this addition and more meant that Plans B, C, and D all were created and fell through. By this time the original date that the first building was supposed to be finished had long since passed and we didn't even have a drawing done.

Fast forward- it is now 4 years later, we are still meeting in the fellowship hall and plans for the building are at a complete standstill. Enter an angel or more like a man on a mission from God- Jack Griffin. Jack is works for a commercial construction company and became involved with our students when my Jack asked him to be a crew chief for a World Changers trip. After that trip Jack was committed to our student ministry and joined us every Wednesday night. Last August, Jack joined us as we took some of our student leaders off to a day long vistion retreat. Afterwards he and my Jack stood in the parking lot of the church. Jack Griffin pointed to the church's three car garage and said, "We're gonna convert that garage into student space." And that was that. Jack Griffin was on a mission, one I believe that God placed in his heart. He started planning, talking, working, convincing, until last May the current building team presented to the church plans to renovate the garage into student space. Eight months later here we are!

After lots of hard work, most of it single handedly done by the Jacks, The Garage is finished. It looks amazing- there is a worship area with a new projector mounted to the open ceiling, a new screen, a stage and room for 100 students to worship. There is a hang out area with a bar, flat panel TV with a Wii, a coke and snack machine, a fooseball table, and ping pong table. The colors are great and the design is really cool (thanks to my amazing Jack). And last night 64 of us got o enjoy the grand opening.

God is faithful and good. It is so exciting to have our own space for the student ministry. We are praying God uses it for His glory and that lives are changed for Him inside the walls of this building.

And now without further ado, pictures (if you click on them you can see them even larger and in more detail)!! 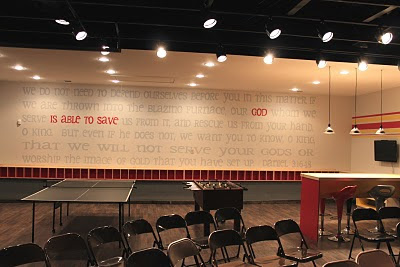 A view of the hang out area from the stage. The text mural I painted is on the back wall. It is Daniel 3:16-18, the basis for the name of our ministry- Fireproof Student Ministry. 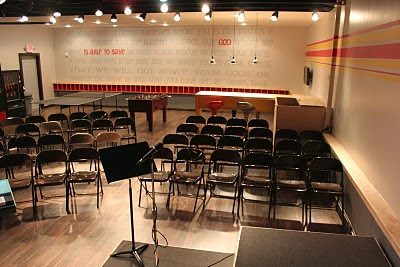 Another view from the stage 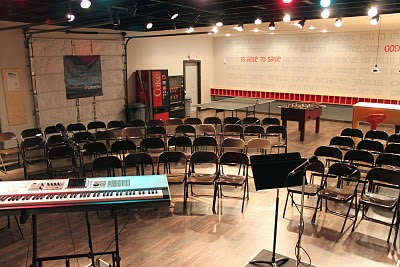 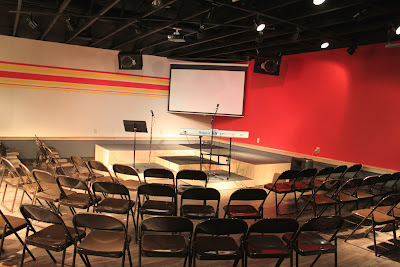 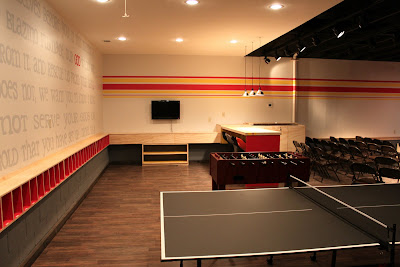 The hang out area with bar, TV, fooseball and ping pong 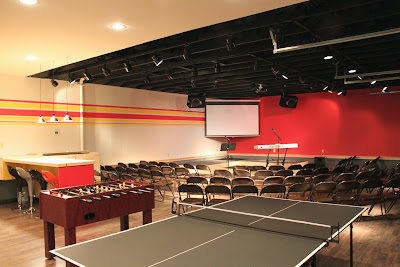 The Garage- Jack and I also painted the stripes. And isn't the red wall cool? 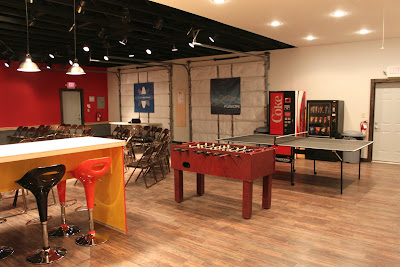 Check out the cool bar stools and vending machines.

Pops and Gammie said…
Fantastic! The Garage is great. I love hearing stories of God at work & how He works out His plans.
Kathy
January 17, 2010 at 7:09 AM