Tuesday we ministered again in Arsi-Negele. This morning Jack and I were a part of the baseball team in the morning. We dropped the school team off at the church and drove the bus to the stadium. Taylor decided that in order to better teach the game we'd choose two teams of 9 players to play. The two teams were made up of boys of several ages- from older children, to teens, to young adults. As we played the game, it was so much fun to watch as they began to really understand the sport. A crown quickly formed. It was so fun watching as the teams cheered for their players, encouraged them to run or to stay on base, and to watch the crowd cheer. I exclaimed to Jonathan several times, "This is so fun!" I can't express how much fun it was watching them play baseball. The childlike excitement and joy on their faces really was awesome. And the last inning was the best as the home team was down when they got the chance to bat last. We told them they had to score 3 runs to win the game and then we also told the crowd. And sure enough they scored three runs! It was so exciting watching them cheer as the third run was scored. I know I've said, "fun" a lot, but it really was! Our time at the stadium was almost up, so as the game ended Jack gathered the crowd together and shared the Gospel with the around 200 people who were gathered there. It was again incredible and many, many made decisions for Christ. As the game ended we were approached by a city official who was the head of sports and recreation. He asked us if we would host a tournament the next day with prizes. What an awesome opportunity! To be invited by the city to host a baseball tournament. Of course we agreed... tune in tomorrow for more about the tournament!

We loaded the bus and went back to the church for lunch. We met the school team who also had a very successful morning at the school. Unfortunately right after lunch it rained again, so we were unable to return to the stadium to do more baseball and evangelism. But the rain stopped in time for Jack to give out a few Proclaimers. Proclaimers are audio recordings of the entire New Testament spoken by a native in the native language. They are quite simply amazing, especially in an illiterate culture with little or no access to the Gospel. They are part of the ministry of the people at Faith Comes By Hearing. We took 10 proclaimers with us to Ethiopia- 5 in Amharic and 5 in Oromo (the other language spoken in Ethiopia). On Tuesday, Jack gave two proclaimers to two church leaders from a very rural church. The church leaders had to walk for 3 hours to get to Arsi-Negele to receive their proclaimers. They were incredibly excited and grateful for them. The plan was for them to set up listening groups in their village. The groups would listen to a portion of the scripture each week and then discuss it. What an awesome way for the Gospel to reach some unreached peoples! It was such an honor to be a part of providing these wonderful tools for the sake of the Kingdom.

After that, it was time for our children's ministry. We had more than 50 kids show up. We decided to keep them in one large group and just rotate teachers. Because it was so wet outside, we did the children's ministry inside the church. It was a little tough because there was no electricity but also no windows in the church, so it was a bit dark. But it actually went really well. Sandy and I taught the children the English words for parts of our bodies and then taught them from Psalm 139 about God's creation of our bodies and His plan for us in Christ. We did this with puppets that we named Angelo and Carlo. They were very interested in the puppets, and thought they were quite funny. Then Michelle took over for songs and games. We sang "Head and Shoulders, Knees and Toes". Then we played Simon Says, except we were worried that might be confusing... so we changed the game to "Michelle Says." Let me tell you, it was a huge hit! The kids caught on quickly and they loved it! Finally, Cheryl took over to facilitate the craft. We had spent time on Monday night preparing the craft as we waited for dinner. We wrote "God Made Me" in English on the top of paper plates and then our translators and Pastor Dembi wrote it in Amharic on the bottom of the plates. And for the craft we painted the children's hands and put their handprints in the middle of the plates. It was also a huge success. The kids loved it. I really felt like we planted some great seeds in their hearts. They were really honed in during the story/lesson time and they really had a good time with the games, songs and crafts. It was really great to watch God move through such simple things. We were really hoping for more children to come in the days ahead as these kids went home and shared with their friends.

We ended the evening worshiping again with our brothers and sisters at the church in Arsi and were privileged again to see several give their hearts to Christ. Another amazing day of ministry in Ethiopia! Here are some pictures from our day: 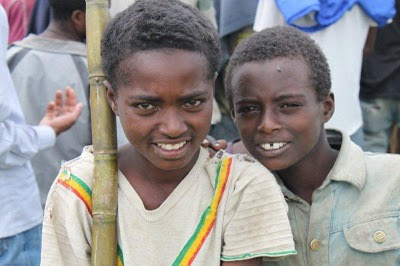 Two kids at the baseball game 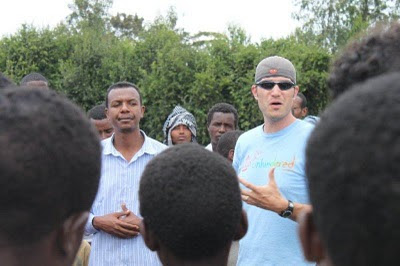 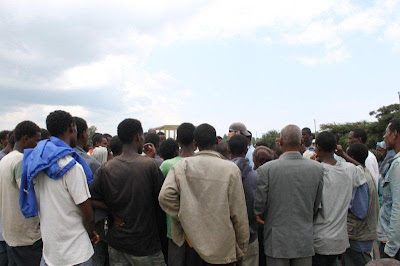 Jack preaching to the crowd at the baseball game. 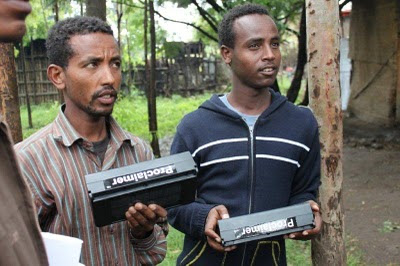 These are the two guys who walked for 3 hours to get the proclaimers. 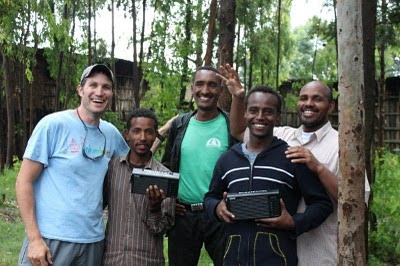 Jack with Dembi, the church planter, the pastor of the church in Arsi and the two church leaders from the rural areas with their proclaimers. 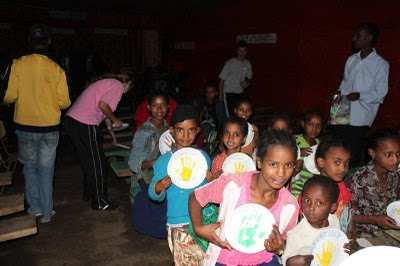 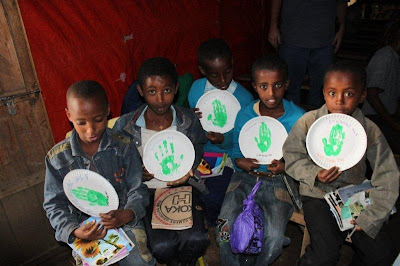 The kids in the church with their handprints