Monday, Tuesday and Wednesday we ministered in the village of Arsi-Negele. In the mornings we had a team in the school teaching English while the rest of the team was in the town "stadium" doing sports evangelism through baseball. Then we had lunch and after lunch we planned to do more baseball and then the children's ministry at the church. And in the evening we worshiped with the church. We ended our long day with dinner back at the hotel at around 8:00 pm.

On Monday, I was a part of the school team, along with Jack, Sandy, Michelle and our translator, Belay. Our lesson was on colors. We were not able to evangelize during our time at the school, but we did invite the kids to the church after school where we would be doing more fun stuff. We went into a first grade english class. They knew a little bit of english and their teacher spoke it pretty well. He loved having us there. We used large flash cards to teach the colors and we played a color game. We also read the book Brown Bear, Brown Bear by Eric Carle and then the kids were able to color a picture with the characters from the book. We used markers to color and even the teacher did not know what they were! It was their first time using markers! We had a great time. The school room was small and dark. There was no electricity, no books, handmade wooden desks and about 40 children. They were incredibly appreciative, especially the teacher who kept having the children say, "God Bless America" "We love America" "Jesus Bless America". We had a great time.

Meanwhile at the baseball stadium, things also went incredibly well. The team just started playing a game and almost immediately a crowd appeared. There were around 200 by the end watching and playing baseball. Several team members were able to share the Gospel through a translator and around 30 gave their hearts to Christ!

We had lunch at the church- PB&J, oranges, bananas, granola bars, etc- and then we went back to the stadium to do more sports evangelism. Unfortunately, just about as soon as we started playing the sky opened up and it started raining. One member of our team, Cheryl, was in a conversation with an Ethiopian who spoke English. He inquired as to our reason for being there and Cheryl was able to share the Gospel with him. She stood out in the rain and shared with him. This inspired all of us hunkered down on the bus and we all got off and wouldn't you know it, but the rain stopped. And then I did one of the coolest things I've ever done. The evangecube is an evangelism tool about the size of a rubix cube that you can move and manipulate into different pictures that tell the story of the Gospel. Well, before we left for Ethiopia we found a big cube- big enough to use in a crowd. I used the evangecube and one of our translators and shared the Gospel with about 80 people! It was really cool and scary and awesome! And in the end around 20 of them gave their hearts to Christ. It was seriously one of the coolest things I've ever done. And another cool thing was that while I was sharing with my group, Cheryl was still sharing with hers and Taylor was sharing with another. It was really an amazing thing to see our team faithful to share the truth and watch as people responded to it.

We left the stadium after a little while and went to the church for the Children's Ministry. As we were setting up, Tekele, one of our translators, told us that while we were out at the stadium a Christian brother asked him why we were all wearing witchcraft bracelets. Apparently, in that region, the people who practice witchcraft wear bracelets made from the same materials as our salvation bracelets. And guess what our craft was for that day.... yep, salvation bracelets. We asked the pastor about it and he thought we should not do the bracelets since it my be confusing and a hindrance to the message. So now we had to come up with something else quickly as the kids would be arriving any minute. This is where it is so great that my mom has everything you could ever need to teach a lesson and gave me more than I asked for. Before we left I asked if I could borrow her copy of Brown Bear, Brown Bear. She sent me her copy of the book along with the coloring sheets (that we ended up using at the school) and also a large piece of felt and the characters made of felt so you could act out the story.... At the time I kind of snickered that she sent so much (sorry Mom!) but we took everything with us just in case... so thankfully the craft time during the children's ministry was the felt board! Whew! Thanks Mom!! We had around 50 children there. We divided them into three groups to rotate through three stations- songs & games, story/lesson and craft (felt board!). But we only got to see two of the three groups as it started raining again before we got to the last rotation and many of the kids left to get home before the rain got bad. But we were able to give out candy to the ones who remained and invited them back for the next day. All in all, we survived the first day of children's ministry and it went pretty well.

And then we worshipped with the church again. Jack preached and several were saved. It was a great day, a challenging day, and a learning day.... Tuesday would be even better! Here are some pictures from our Monday. 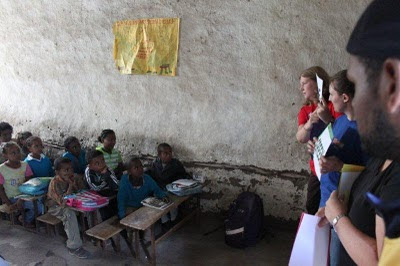 Teaching in the school 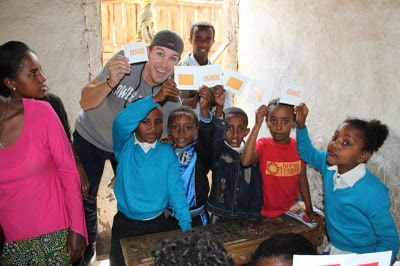 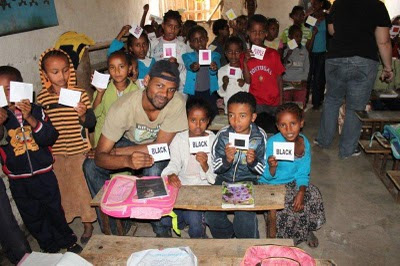 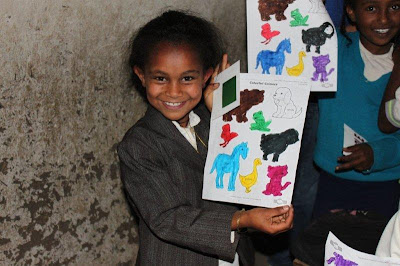 She was very proud of her coloring- and so cute! 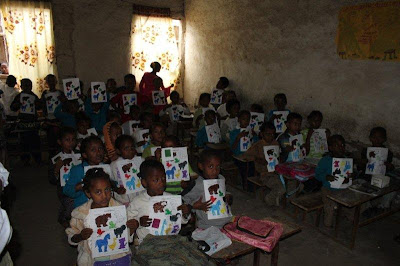 The class with their colored sheets 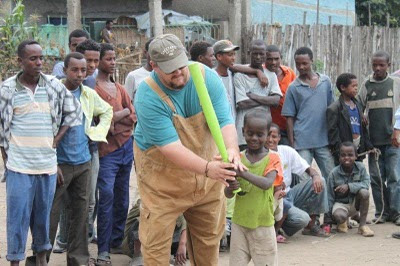 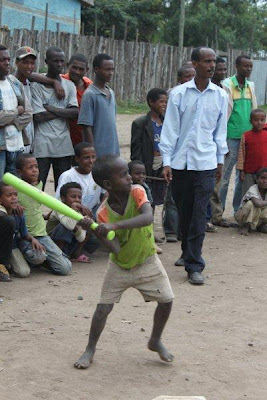 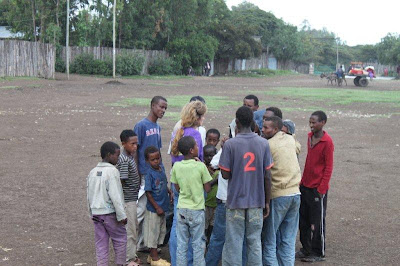 Cheryl shares the Gospel in the rain 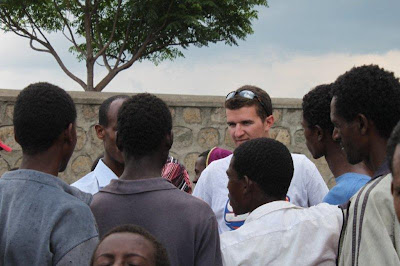 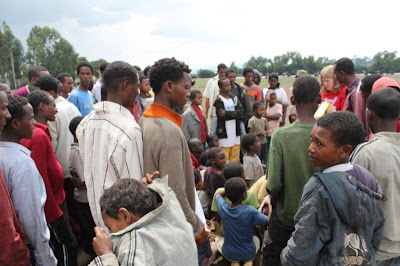 Me sharing the Gospel with the big cube.... can you see me? 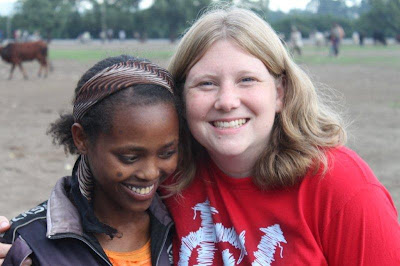 This girl prayed to receive Christ! 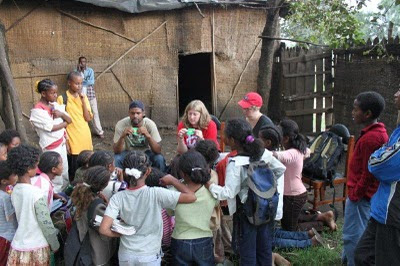 O'Dell Family said…
I love reading your updates on Ethiopia. What a neat opportunity! Hope y'all are adjusting to being back home!
October 3, 2010 at 7:42 PM